WARNING: Major spoilers for Season 1 of “The 100” ahead

My writing buddy Chelsea told me to check out a show she’d started watching called “The 100.” She promised good characters and excellent eye candy.

She neglected to mention it was terrible.

Seriously. The first three episodes of “The 100” were some of the worst TV I have ever seen. They were super predictable, packed full of cliches, and kept trying to suck me into teenage drama. 100 kids are stranded in a new environment with no way to contact their families; I care more about that than I do about who’s sleeping with who!!

What can I say? It got a lot better. So now I’m in this weird middle ground, where I’m really invested in the characters, yet roll my eyes at most of the things they do and say. If anything, I’m this show’s frenemy: I claim to love it, but I’m not very nice about it.

The same things I love about this show are the same things I hate about it. I have so many things to say that can be spread out over multiple posts, so today we’ll start with the most important component of any story:

THE CHARACTERS
Good: Even though the first episode of this show was beyond awful, I kept watching for one reason: I wanted to see all of the characters die. As dark as it sounds, I was very invested in the characters–mostly in seeing them get their comeuppance for being so incredibly stupid. And all of them were so dumb. Except for Wells.

Yes, he was a goody-goody. Yes, he moped around in the Friendzone. I liked him anyway. As far as forces for good went, he and Clarke were the only ones concerned with keeping order, and I much preferred unlucky-in-love Wells to whiny, preachy Clarke (at first, anyway). He kept coming up with good ideas that NO ONE LISTENED TO, and his friction with Bellamy and his cronies made for good, tense TV. I was looking forward to seeing his growth and influence over the rest of the season. Turns out the writers didn’t feel the same way.

Wells was dead. I had no one left to root for. Then a miracle happened: the other characters got better. If not better, than at least interesting. Clarke exhibited ambiguous ethics and made questionable decisions. Bellamy tried to be a good leader in the face of torment, guilt, and self-doubt. Octavia rebelled against her former way of life by hooking up with a Grounder. 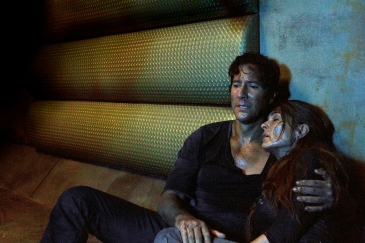 Kane transitioned from a murderous extremist to a broken leader forced to deal with the guilt of his previous actions. Over the course of several episodes, Kane tried to rescue as many people as he could after the Ark lost power. Every time Kane faced a life-threatening situation, I found myself screaming in agony. Near the season’s end, he offered to sacrifice himself for the others, only for Chancellor Jaha to take his place.

Similar to the A Song of Ice and Fire series, where I ended up cheering for initially unlikable drunks and rapists, this show made the villains some of my favorite characters. Unfortunately…

Bad: …their heroes weren’t as sympathetic. Clarke and Bellamy are great; I’m fine with them. It’s the side characters I take issue with. What bugs me about this show is not that it has characters I don’t like, it’s that it wants me to root for unlikable, unsympathetic, and undeserving ones.

Speaking of: in the first episode, the audience is introduced to Clarke and Wells. Wells is clearly into Clarke and GOT HIMSELF ARRESTED SO HE COULD BE WITH HER. Clarke wants nothing to do with him. Already some interesting conflict, and an interracial relationship to boot! I was stoked.

Then this idiot floats over:

I don’t understand what the deal is with this guy’s acting. He was so great in that 2011 indie art house film! Okay, it was put out by Disney. Okay, it was “Prom.” Okay, I saw it twice in theaters. But I really enjoyed him in it! In this show, more than anything he reminds me of a baby Keanu Reeves, another favorite actor of mine.

Finn starts flirting with Clarke the minute they land on Earth. Four episodes later, the reveal comes: Finn has a girlfriend he never mentioned!

We’ve all seen this plotline before. Surely this can be resolved in a way that leaves Finn’s likability intact.

Here’s what Finn does:

And he’s not framed as a jerk! The show wants me to buy that he’s a confused young man trying to do the right thing when that is clearly not the case. The writers gloss over his flaws instead of acknowledging them and letting him develop into a rounded character. I have no patience for Finn and was so glad when both Raven and Clarke finally shut him down.

There are other characters I could mention, but Jasper is the worst one. For one thing, I couldn’t remember his name for the first five episodes and kept referring to him as “Goggles.” For another, I cheered when he got speared by Grounders in the pilot episode.

I have my reasons. A girl tries to get with him and he rejects her, calling her “low-hanging fruit.” Strike one. He never apologizes to his friend Monty for saying incredibly hurtful things. Strike two. He’s so entitled, getting really angry when he does nice things for Octavia and she doesn’t fall at his feet. Strike three. You’re out. Go die in a hole.

What really frustrates me is that so much of the other characters’ energy is spent trying to save or rescue Jasper. Yes, he has valuable skills…but so does Monty. Yet when Monty’s in trouble, Bellamy’s reaction is, “Huh, that’s unfortunate.” When Jasper’s in trouble? Time for Bellamy to go on a dangerous solo rescue mission!

Since this post ends on a downer note, next time I’ll end with the positive in order to convince you that I really do like this show!