My friend Chainsaw the Raven asked to share some of her favorite raven-themed books for spooky season and I couldn’t say no!

Spooky season makes me a bit homesick, so I made a list of raven-themed books to take my mind off of things.

If you have a favorite raven-friendly book, PLEASE TELL ME so I can add it to this list! 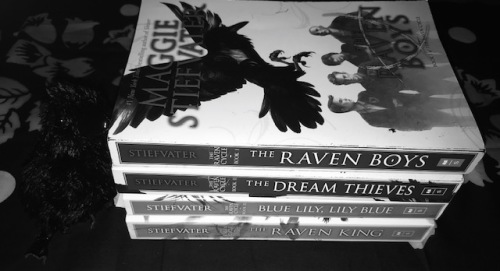 False alarm: the boys themselves aren’t ravens, though their school mascot is.

The boys wear sweaters and go spelunking. One of them adopts a raven of his own.

I got to meet him and I think we hit it off!

Ronan, by the way, is the BEST Raven Boy, NOT Gansey.

And no, Ronan didn’t tell me to say that…

Daughter of Smoke and Bone

Though Kishmish is more crow than raven (and he’s not even a real crow), he’s still quite the corvid icon.

Aaaand that’s everything to do with Kishmish! Nothing bad happens to him or anything!

Unrelated fact: neither crows nor ravens are immune to fire.

Just in case you were wondering.

Again, crows are not ravens. People get crows and ravens mixed up ALL. THE. TIME.

We might belong to the same family, but we’re not the same!!

The crows in this story are criminals.

Like the Raven Boys, they’re not real crows, just teenagers in a crow gang.

Sorry if that was unclear.

Despite NOT being about birds, this duology is very good.

Lauren and I both cried at the end…but for different reasons.

(Hers was the WRONG reason.)

Trust me, that joke was very funny.

Like the raven in Poe’s famous poem, I won’t leave you alone until you read this book.

OR HAVE PEACE NEVERMORE! (See what I did there?) 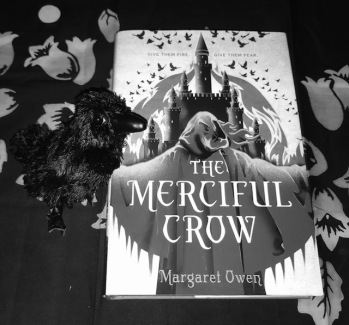 To be honest, I’m pretty tired of publishers treating ravens and crows as interchangeable birds.

Stop advertising your books to crows AND ravens if you’re only going to represent crows!

That said, I am very excited for Margaret Owen’s book on crows.

I haven’t looked into it, but I’m hoping it’s about ACTUAL CROWS.

(Reminder: despite what the tagline says, crows are NOT immune to fire.)

Lauren borrowed the first Blue Raven book from a friend.

She had the book for a year and DIDN’T EVEN FINISH IT.

Of course, when I asked to use it for today’s photo shoot, she said she didn’t have it anymore.

The villain calls him a “pigeon,” which is just…the RUDEST.

I would add more, but I was using Lauren’s book collection and she doesn’t read much raven literature.

Which is too bad.

Do what you can to support your local corvids.

Today, I’m going to read Kami Garcia and Gabriel Picolo’s Raven. I hear it’s about a girl who’s not actually a raven.

Chainsaw is a Seattle-based raven writer from Ashland, Oregon.

When she’s not explaining the differences between ravens and crows, she loves fangirling over Ronan Lynch and discussing The Raven Cycle.

Find her work on http://www.narrativeparadise.com.