Like Star Wars, The Lunar Chronicles utilizes familiar sci-fi archetypes, such as the ace pilot, the plucky heroine, and the damsel in distress.

I love both series for exactly this reason.

Originally inspired by the now-released The Rise of Skywalker, I tried to figure out which Lunar Chronicles characters matched up with my beloved Star Wars staples.

It would have been simpler to match up characters by their role in the story, e.g., Cinder with Luke, Kai with Leia, etc.

That…is not what I did.

(Spoilers for both Star Wars and The Lunar Chronicles)

(This includes The Rise of Skywalker)

(Golly, did I hate that film)

Likening one brunette protagonist to another isn’t a huge stretch.

And yet the similarities are uncanny.

Let me see, both women:

Also, the supercomputer in Cinder’s brain reminds me of Rey’s “raw strength.”

I went back and forth on this one, because Kai frustrates me and I don’t want him tarnishing General Organa’s good name.

They both have ROYAL BLOOD!

They both compromise to SAVE THEIR HOME PLANETS!

They are both occasionally IN DISTRESS!

Their journeys do diverge a bit.

Leia becomes a general, runs a Resistance, and dies saving her son.

Both characters have sharp tempers, sidekick energy, and relatives that died for the cause.

Also, the presence of both characters is greatly reduced in their respective final chapters. 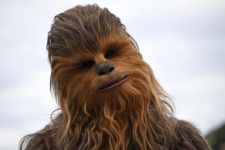 HE AND CHEWBACCA RIP PEOPLE’S ARMS OUT OF THEIR SOCKETS WHEN THEY LOSE.

Both characters are walking carpets.

(I ALMOST chose Jar Jar Binks. I was THISCLOSE.)

I love Threepio, but dude is a load.

Cress is even worse.

Though both possess useful hacking skills, they often find themselves in dire peril and get left behind by the group.

They also spend a lot of times in desert climes.

Additional mystery: is Cress the person inside R2-D2?

We may never know.

This is the highest possible compliment I could pay Thorne.

Lando embodies Thorne’s slickness and love for the ladies.

And, loath as I am to admit this, both characters exhibit some cowardice.

Sure, they redeem themselves, but Lando sells out his friends as surely as Thorne mopes his way through the final book.

At least Lando saves the entire Resistance in TROS and Thorne gives an adorable romantic speech to C-3PO (er, Cress.)

Consider this: one of Lando’s lines in TROS is, “Send Leia my love.”

This one took me a while, as Winter has some fairly unique character traits.

Though both Padmé and Winter have damsel-y moments, they prove capable fighters and leaders in different ways.

There’s a reason people want these characters to rule.

(Also, they both fall in love with their personal guard. Whoops.)

I HAVE NEVER BEEN PROUDER OF AN ASSOCIATION.

Arguments on behalf of Typho: he seems tight with Queen Amidala, he gets a few one-liners, and he is all business.

(How was THIS not the bodyguard Padmé fell in love with?)

Jacin Clay snarks his way through multiple face-heel turns, nurses an obvious crush on his princess, and never falters in his loyalty to said monarch.

I say this comparison works.

Both characters supposedly did it all for love…and killed their significant others in the process!

Also, both were set on fire at one time or another and adopted villainous visages to hide their horrifying scars!!

What an interesting parallel!

(A more salient parallel is that I hate them both. WHOOOOOOOOOOOOPS.)

Both characters seem blood-hungry and a little unstable.

Cinder breaks Sybil’s sanity at the end of Cress.

And, uh…Hux gets shot after betraying the First Order.

I am ALMOST POSITIVE both characters wear glittery gold robes and I DON’T WANT THIS IMPRESSION CORRECTED.

Both bald, too. Another similarity.

Oh, and they both make gross, suggestive comments and act predatory around female characters.

Iko feigns humanity, longs for a humanoid body, and flirts with ship captains.

Pretty close, if you ask me.

I wanted to stoke the dying embers of my fond feelings for Star Wars with my admiration for the Lunar Chronicles.

Did you see the post image?? Lunar Chronicles gets some kicky new covers on February 4th!

I must own them all!

That’ll fill the hole in my heart where the New Trilogy once lived!