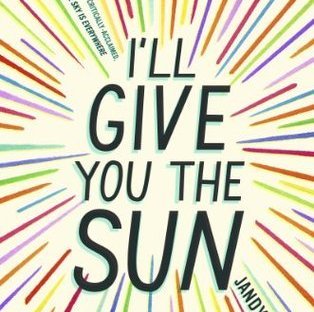 The premise: At the start of the book, fraternal twins Noah and Jude are best friends despite being opposites; Noah is shy, likes to draw, and folds in on himself, while Jude is more outgoing, feels comfortable around others (especially boys), and prefers making sculptures. Three years later, the two no longer speak and have almost switched personalities: Jude is on a boy boycott and Noah is now popular and athletic. Both are miserable. Told in alternating perspectives chronicling the past and the present, the twins figure out how to love their messed-up family, each other, and themselves.

Go buy a copy of this book immediately. Immediately.

She’s better at expressing emotions than I am at verbalizing them. She nails the most obscure emotions by writing off-the-wall descriptions about planets or moons or flying into the ceiling. When I read her books, I feel everything her characters feel and more without having to be persuaded. And she makes it seem easy (it’s not).

To be honest, it took me a while to get into this book, which starts in Noah’s perspective. Being in Noah’s head is so bizarre I thought for a while he had synesthesia. Despite its weirdness, the first chapter sets up Noah’s odd worldview and his family dynamics.

Then Jude’s chapter–taking place three years later–hits and everything is terrible.

After the time skip, Noah and Jude’s worlds are drastically different. I was shocked that so much happened so quickly without knowing why. The book’s organization sets up an intriguing mystery that lets readers slowly piece together exactly what went wrong with Noah and Jude’s family.

Nelson’s writing benefits from having two drastically different narrators. It was fascinating to see how each twin dealt with romance and grief and to compare their differing–and often faulty–perspectives on the same events. The title comes from a game invented by the highly competitive twins where they divide up the world–Noah takes the oceans but keeps the flowers, Jude keeps everything but gives up the sun, etc. The game underscores their complicated relationship; the twins love each other and have fun together, but always with an underlying spirit of intense competition.

The twins make poor decisions yet remain likeable. In other books, I can be overwhelmed by the amount of tension and conflict. Every event in this book contributed to the tension, ruining relationships and sometimes killing characters, but nothing that happened felt unnecessary. Each thing that happened tied into the eventual conclusion, leading to satisfying resolutions to every plot thread.

The plot thread that stuck out to me was Noah’s relationship with his dad. Gay, artistic, and sensitive, Noah has never felt accepted by his sports-loving father. In the latter half of the timeline, they bond over animal documentaries and tennis. Noah is both elated and worried that their fragile peace will be ruined when he comes out of the closet. Of all the storylines–romance included–this one was my favorite because it was treated with such delicacy. Noah’s dad isn’t a bad guy–he’s just a stranger in his own family, at a loss at how to interact with his two gifted kids. The culmination of Noah’s coming out story provided one of my favorite endings in recent YA history.

This is a book I want everyone to read and talk about, and one that has earned a spot on my shelf. Here’s a list of instructions inspired by one of the books best quotes:

2 thoughts on “BOOK REVIEW: I’ll Give You the Sun by Jandy Nelson”