My recent complaints have made me nostalgic for the series.

I guess WRITING AN ENTIRE SCREENPLAY ABOUT REMUS LUPIN WILL DO THAT TO YOU.

And this tag (created by Isabeau’s Literary Musings, discovered at Under the Book Cover) had rapid-fire questions that are easy to answer.

Goblet of Fire was my favorite until Ron Weasley ruined it for me.

It has the best blend of dark and light, the most interesting subplots, and the most heartbreaking death.

I will die on this hill.

I don’t care for The Half-Blood Prince.

Everything about it feels unpleasant.

I LOVED the sixth movie.

I thought it balanced humor and action while streamlining all the stupid subplots.

The Cormac-Hermione-Ron-Lavender subplot MADE MY LIFE.

Every time my friends and I marathon the movies, everyone checks out during the second film.

No one likes The Chamber of Secrets.

NO ONE LIKES THE CHAMBER OF SECRETS.

Could you cool your jets, TOM?

“I don’t want to talk about how I feel, all right?”

“Harry, suffering like this proves you are still a man! This pain is part of being human–”

A psychiatrist I spoke with last summer described a suicide continuum.

On one end, a depressed person makes a concrete plan to end their life.

On the other, a depressed person wishes to die in their sleep. They want a break from all the feelings that come with living.

Harry exists in that second state.

After Sirius dies, Harry feels numb. When he lets himself feel, he gets angry. He destroys things. He just lost his only family – he wants to be DONE. 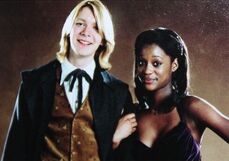 I tell myself he’s not indistinguishable from George.

He and Angelina COULD HAVE HAD A FUTURE TOGETHER.

I am going to waste my vote on a side character…

I hate the Harry Potter villains.

Him. He’s my favorite.

YOU’RE THE CHOSEN ONE. NEVER FORGET IT.

You almost tricked me, tag.

If I may MAKE THE DISTINCTION, Movie Remus Lupin is my favorite.

I love David Thewlis and his little moustache.

ROUND 2: WOULD YOU RATHER

Wash Snape’s hair or spend a day listening to Lockhart rant about himself?

I would wash Snape’s hair. That sounds soothing.

Duel an elated Bellatrix or an angry Molly?

She couldn’t get rid of a boggart properly that one time.

That doesn’t make her weak – it means she has a HEART.

Bellatrix, on the other hand, does NOT.

Travel to Hogwarts via the Hogwarts Express or flying car?

And I’d rather not pilot a vehicle that could fall out of the sky at any moment.

I will gladly be a passenger.

Hey, quick question: DID HOGWARTS SERIOUSLY ALLOW DEMENTORS TO HAUNT THE HOGWARTS EXPRESS THAT ONE TIME?

Kiss Voldemort or give Umbridge a bubble bath?

I am MUCH more comfortable with nudity than with physical contact.

I’ll loofah Umbridge’s back if it gets me out of kissing someone random.

Ride a hippogriff or ride a Firebolt?

Is there a character which you felt differently about in the movies vs books?

It was a different interpretation than the book, but his performance was one I liked.

Is there a movie you preferred instead of the book?

And it’s NEVER ON SALE at Target when I browse the DVDs!

Harris is our king.

His performance greatly informed how I pictured Book Dumbledore.

I thought he was a perfect casting choice and I wish he hadn’t died.

Rowling tried to make Dumbledore a rough-and-rangy kind of guy – which fits Gambon – but that’s not the soft, funny professor I imagined.

Your top thing (person or event) which wasn’t included in the movie that annoyed you most.

The Marauders were BARELY in the films.

I thought Harry needed that connection to his dad.

And the brief flashbacks in the movie don’t make James look very good.

Could we have had some more backstory, please?

If you could remake any of the Potter movies, which would it be?

Order of the Phoenix.

It’s the shortest movie adaptation of the longest book and they left out WAY too much.

Which house was your first gut feeling you’d be a part of?

Everyone wanted to be Gryffindor back in the day.

Then we all got wise and claimed to be Ravenclaws.

I really thought I’d be one of the brave, adventurous types. I was a high-energy kid with a performative streak.

Which house were you actually sorted into on Pottermore (or another online sorting quiz)?

Pottermore tagged me as Gryffindor, but Time Magazine pegged me as a Ravenclaw.

The second house makes more sense for me.

Except for one thing: I hate puzzles.

I can’t solve a riddle to save my life.

Which class would be your favorite?

I was a decent Chemistry student.

Potions is the one class I’ve always had an interest in.

Which spell do you think would be most useful to learn?

I hate getting out of bed to grab things.

My dad pronounces it “axe-see-oh.”

Which character do you think at Hogwarts you’d instantly become best friends with?

In the first book, everyone makes fun of Dean for watching soccer.

MEANWHILE, A GIRL WITH DENTISTS FOR PARENTS, A POOR GINGER, AND THE KYLO-RENNIEST WIZARD ALIVE RULE THE SCHOOL.

I’ll be your friend, Dean. We can get butterbeer and buy chocolates at Honeydukes.

If you could own one of the three Hallows, which would it be

Yeah, yeah, Albus, it does no good to dwell on dreams and forget to live, I KNOW.

But it would be nice to connect with people I’ve lost.

Just to call them up when I miss them.

Is there any aspect of the books you’d want to change? This can be a character, event, etc.

I still hate you for the kid thing.

But I dig your whole chocolate, tea, and patchy sweaters vibe.

If you could bring one character back to life, which would it be?

Ugh, I want the Hallows.

Keep your gross soul boxes AWAY from me!

Maybe I WILL reread the series.

Will I ever “catch up” on books I’m reading?

What’s that? Probably not.