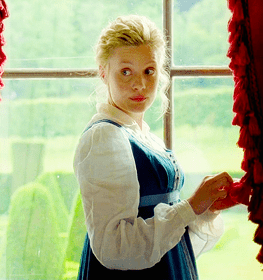 Background
Alanna of Trebond switched places with her twin brother and posed as a boy for years to become Tortall’s first female knight. Her world consists of swordplay, jousting, and magical powers bestowed upon her by the Goddess. She hates social climbers and weak women alike, preferring the company of thieves and warriors.

While Emma Woodhouse has depths, they’re buried deep beneath layers of social niceties and subtle manipulation. Emma loves the power she wields over others. She’s not much for deep conversation, but she throws a mean picnic. Like…actually mean.

The Couple
Alanna’s appreciation for other women is limited to those who look fantastic while cutting down enemies. She likes underdogs, oppressed peoples, and magical cats far more than she likes lords and ladies. Don’t get her started on fancy parties.

Emma has no interest in the gritty side of knighthood. She’d be down for songs composed in her honor or daring deeds performed for her praise…but those chivalrous concepts  come from literature and Emma doesn’t read. She prefers wit and throwing the same fancy parties Alanna so despises.

In terms of grit, these two are equals. In any other case, that would be enough. Too bad Emma doesn’t WANT an equal. Look who she picks for a best friend!

Compare Alanna to Harriet Smith. Alanna goes after what she wants and challenges people she dislikes. She’s handy with a sword and once killed a man by breaking his nose.

In the second book of her series, Alanna encounters a rival for Prince Jonathan’s affections. Tamora Pierce describes Princess Josiane of the Copper Isles as tall and blonde, a good dancer, and an annoyingly coy flirt. Hmmmmmm….

Yes, Alanna. Hook up with someone who reminds you of the woman who killed your cat.