My friends like to go out and party. I stay home, eat candy, and watch The Lost Skeleton of Cadavra….if I remember the holiday at all.

But this year, I feel my excitement growing. My team at work plans to win our company’s costume contest. (Revealing our plans would compromise the operation.)

I saw this movie for the first time last year. It’s so cheesy, I can’t not love it.

And now I can use it to talk about books!

(Special thanks to Zezee with Books, whose post inspired me; Never Not Reading, who created the tag; and Flavia the Bibliophile, who provided the graphics.)

I finished the Matched trilogy in college. 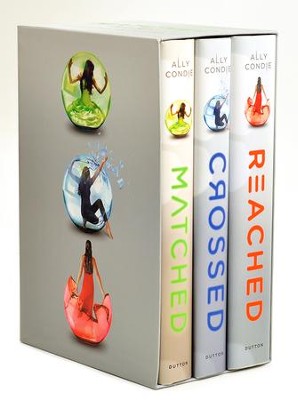 You know those books that aren’t flashy but solid?

While the purported love triangle goes nowhere (who actually thought Xander stood a chance?), the characters grow and change, the world stays fascinating and plausible, and Condie provides one of my favorite endings to a trilogy: bittersweet, just the way I like it.

I don’t think about this trilogy often, but, while reminiscing about my reading experience, I realized I have only positive feelings about the final book.

Users on TV Tropes like to say she should be pitied; the woman just wants to be loved.

She also kept Evret Hayle as a sex slave, but whatever.

All three of my friend Jeremy’s kids read the How to Train Your Dragon series.

Clearly I’m not the target audience because I don’t understand the attraction.

I normally like children’s literature, but this series does not appeal to me.

Go ahead, My Plain Jane.

I read large portions of this book out loud. It was fun – the Lady Janies write great dialogue.

I couldn’t stop laughing at their brutal roasting of the Jane Eyre/Rochester ship. They got SO MEAN.

I was initially disappointed that My Plain Jane didn’t reach the emotional heights of My Lady Jane, but I realized later it didn’t need to. In one I get a satisfying, hilarious romance; in the other, I get Victorian ghostbusters. YES.

I kept seeing ads for this book when I was still on Facebook.

I still haven’t read it. The tagline is, I kid you not, “In a world divided by gender…”

YOU MEAN THIS WORLD?

One of the later books is called The Gender War.

A GENDER war? What a shallow representation of the patriarchy.

Where do trans and non-binary individuals fit into this?

I don’t want to harp on the concept; I’m sure, in capable hands, it could be done well.

I just object to a LITERAL GENDER WAR being packaged as an edgy dystopian novel.

WE HAVE ENOUGH OF THOSE.

In one essay, she discusses her ex-boyfriend and her mother’s death.

Kaling covers a WIDE RANGE in this book.

How is there a new Throne of Glass book every time I turn around?

HAVEN’T HEARD FROM YOU IN A WHILE.

While researching my undergrad thesis, I found an article listing reasons why Katniss made the perfect role model for teenagers navigating a technological landscape.

Katniss is the dumbest protagonist to grace the best seller’s list. Get her off your pedestal.

I haven read a Magic Attic Club book in FOREVER!

My elementary school library stocked up on the entire series.

I loved reading about Megan’s adventures, but I often settled for Heather’s half-hearted journeys into ’50s soda shops and Romani culture.

These books went out of print, which is a TRAVESTY.

From what Elizabeth Gilbert writes in her other memoirs, it sounds like a lot of readers hated Eat Pray Love.

Look…I’m not the book’s biggest fan.

But I thought it was more underwhelming than offensive.

There are moments of brilliance throughout. I mined for meaningful nuggets in the “Pray” section and found plenty.

Say what you will about “mighty whitey” stereotypes and privilege (those are valid criticisms); the writing’s not terrible and Liz never claims hers is a universal experience.

A woman wrote about her personal spiritual journey without making it a prescription. That’s all.

You wanted to know what Daenerys was up to?

You need to know if Tyrion survived?

Sorry, friends, it’s just Jaime and Samwell Tarly from here on out.

Jess is the protagonist of Cabot’s other best-known series, 1-800 Missing,

I had no idea she and Mia shared a universe.

It’s Halloween the 15th! Dominate your office’s costume party and tag yourselves!