You know those super-casual Taylor Swift fans who listen to Lover on loop and add tracks from reputation to every playlist?

That’s the type of fan I was before Netflix released Miss Americana.

Now, I guess, you can call me a Swiftie.

However, knowing this about myself hasn’t made it any easier to pick a favorite album.

Before Lover came out, I heartily endorsed 1989.

After Lover, I felt sure I’d found my favorite.

Then I relistened to reputation and have been confused ever since.

Now I plan to divine my favorite album the only way I know how: by conducting an unnecessary qualitative research project.

I used Spotify to listen to Taylor Swift’s discography and “favorite” various tracks.

I favorited a song if it met two criteria:

I limited my study to the standard editions of Swift’s seven studio albums – no bonus tracks, alternate versions, singles, or EPs.

For each album, I divided the number of tracks I favorited by the total number of songs on the album. I then converted this score into an Album Resonance Score with the lowest possible score being 0 and the highest being 100.

Album aesthetic played only a minor role in decision making, not enough to skew the results of the test.

Before this experiment, I had never listened to Taylor Swift’s debut album.

I hate country music and have been in a decades-long standoff with my dad wherein he taunts me with Florida Georgia Line singles and I fume.

This album is…fine. I don’t have anything bad to say about it. It’s solid for a first album.

I recognized more of the songs than I thought I would from romantic comedies and student talent shows.

Of the 11 songs on the album, I favorited 4, resulting in an Album Resonance Score (ARS) of 36.

I don’t plan to revisit this album; county still isn’t my genre.

My favorite track on this album is “Our Song,” because I am secretly a mush.

This album would work perfectly as the soundtrack to a feel-good film. (Hear that, Sherwood Pictures?)

The book this album most reminds me of is Anne of Green Gables. When I think of a plucky, innocent romantic who loves to write, I think of Anne. 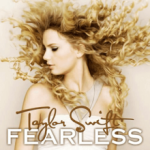 The average American knows approximately 75% of the songs on the album. (This is an estimate.)

These songs permeated popular culture in the 2000s.

In college, I knew all the words to “You Belong With Me” without ever having listened to the song.

This album, though still heavily country, is poppy and fun and middle-school-dance-friendly, making it almost impossible to dislike. (I see you, stubborn male music fans. Keep trying if it means that much to you.)

My favorite song on this album is “Forever & Always,” though, as I love ALMOST ALL of the songs, this is subject to change.

Case in point: of the 13 songs on the album, I favorited 10, resulting in a surprisingly-high ARS of 77.

Fearless gives me nostalgia for a high school experience I never actually had, one replete with romance, short skirts, and t-shirts. In terms of throwback albums, it holds up.

This album would be perfect for a summer roadtrip through, say, Eastern Washington.

Listening to this album reminds me of Felicity Montague from The Lady’s Guide to Petticoats and Piracy. She’s an ace/aro aspiring doctor who befriends pirates and bests mythical beasts. That’s pretty damn fearless.

In 2010, I saw a TV spot for Speak Now that portrayed Swift as a student in Paris.

Seeing Taylor in brown wig and glasses forced my hand. The woman was pitching to my demographic – the least I could do was buy her album!

Turns out I am a fool, because I hate this album.

I tire of it after the first four tracks.

Explain to me how I’m supposed to get through “Dear John,” a seven-minute DIRGE.

Though Speak Now was advertised as pop, it’s the most countryfied of Swift’s albums, even more so than her first two.

As such, most of the songs get on my nerves.

My favorite track on the album is “Haunted,” because I grew up listening to Evanescence and still wish I was a goth.

Of the 14 songs on the standard edition, I favorited 4, garnering an ARS of 29.

I’m glad other people like these songs. I, however, would prefer to skip them.

This album would be perfect for a tense family gathering where relatives pick at meatballs and grind their teeth over the background music.

Despite mostly hating this album, it reminds me of the fun YA contemporary The Last Summer of the Garrett Girls by Jessica Spotswood. In it, four sisters go on sassy adventures and push mean people in the lake.

On her podcast Terrible, Thanks for Asking, Nora McInerny claimed Red was the best Taylor Swift album.

The woman was clearly wrong…or was she?

While listening to this album, I had a recovered memory of a harrowing car journey where Red played on loop, an experience that gave me an unfair distaste for some of the songs.

Turns out I like this album a lot better when I’m not stuck in a Suburban with an anxious driver.

This album would be perfect for a barn wedding in, say, Eastern Washington.

For a book that matches the tone, I chose Since You’ve Been Gone by Morgan Matson, a bittersweet story about a girl who rethinks her entire friendship after her best friend disappears. Don’t worry: there’s a fluffy romance, as well as horse- and pizza-related adventures.

1989 contains some of my favorite songs of all time.

It also has some tracks I absolutely cannot stand.

For example, I skip “How You Get the Girl” and “This Love” almost every time they come on.

Something about the lyrics “pictures in frames of kisses on cheeks, cheeks” and “Your kiss, my cheek” rile me up.

How do you make cheek kisses sound like such a foreign concept?? I HATE IT.

Because I adore so many of the other songs, though, I had a hard time picking a favorite.

I love “Welcome to New York,” “Out of the Woods, and “Clean” in equal measure.

Of the 13 songs on the standard album, I favorited 9 of them.

Even though I THOUGHT I loved this album best, the ARS came out to only 69.

I still cherish it.

To me, 1989 represents new beginnings. In that sense, this album would be perfect for a house-warming party in, say, Eastern Washington.

Book-wise, what’s my go-to recommendation for wistful Big City dreams? Why, Someday, Someday, Maybe by Lauren Graham, of COURSE! This compassionate novel was there for me when I was making less-than-minimum wage and crying in my bathtub. I will recommend this book always.

reputation is my favorite. Sorry to kill the suspense.

This was the first Taylor Swift album to have more than two production credits from Jack Antonoff, one of my favorite musicians.

Because of this, I CANNOT pick a favorite track. It is an impossible task.

This album is perfect for pregaming before a night out. I can feel my mom glaring from her house. I don’t know what to tell you, Mom. The vibe of this album is people doing their hair and trying on leather and sequins while throwing back shots. It can’t be helped.

For an “edgy” book that fits the album’s aesthetic, read Ninth House by Leigh Bardugo. It’s dark as all hell, both in content and color. Galaxy “Alex” Stern has a Tough Girl reputation that she actually deserves. 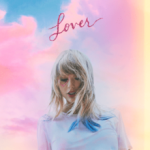 You’ve seen how many times I’ve referenced the Lover album on this blog.

Surely THIS is my favorite Taylor Swift album!

It has even MORE Jack Antonoff-produced tracks than the LAST album!

Nope – reputation is still my favorite.

Even though Lover didn’t surpass reputation, it came pretty close.

This new Taylor Swift era really speaks to me, pastels and all.

Unlike with other albums (specifically 1989), I enjoy the ballads and singles on Lover equally.

For the few songs I don’t like, I’m more apathetic toward them than anything.

As a whole, this album puts me in a good mood. I listened to it on repeat during the summer to stay positive.

Picking a favorite track, though, is hard.

None of the songs really stand out.

“The Archer” stimulates my emotions the most, so let’s call that one my favorite.

Not quite 100, but still a decent score.

This album is perfect for painting your house with your significant other on a sunny day. Both the music and the paint will bring color into your life.

It might seem odd that I’m recommending a book that I hated, but hear me out: the events in Louisa May Alcott’s Little Women match up with Lover’s tracklist almost perfectly. I really feel like the songs on this album capture the highs and lows of the March sisters’ lives. “Soon You’ll Get Better” is the Beth March anthem.

Below is my official ranking of Taylor Swift’s albums based on their Album Resonance Scores:

There’s still research to be done. For instance, a more intense lyrical analysis could determine whether the writing on each album influenced my scores. Additionally, giving individual songs different scores might yield different results.

For now, I’m happy to say reputation is my favorite Taylor Swift album.

I’ll leave further musical research til her next record.

15 thoughts on “Picking a Favorite from Taylor Swift’s Discography”