This episode follows each of the main characters as they adjust to life in Ba Sing Se, allowing characters who don’t get much screen time to shine. What stood out to me was the break in format; instead of having one smooth, connected storyline, the episode is broken up into six four-minute segments chronicling each character’s adventures. The Gaang gets some good laughs–Aang causes pandemonium with zoo animals; Toph and Katara get revenge on some mean high-society girls; Sokka raps at a women’s poetry club–but the parts that stand out to me are the ones told from Iroh, Zuko, and Momo’s perspectives.

Iroh’s is the hardest for me to talk about. After buying supplies for a “special day,” Iroh sets up a picnic at the top of a hill. Then comes the reveal: he’s celebrating his dead son’s birthday. Not sad enough? He sings a song he used to sing to his son and breaks down in the middle. Still not sad enough? Iroh’s tale is dedicated to Mako, Iroh’s voice actor, who passed away before the episode aired.

Zuko, the love of my life, goes on a date in his portion. A girl who frequents the tea shop takes a liking to Zuko and asks him on a date. Things go about as well as you would expect. Zuko is his surly, unreasonable self, making conversation impossible and yelling, “SHE’S NOT MY GIRLFRIEND,” in a crowded restaurant. For some reason, the girls sticks around and Zuko gets a sweet moment where he lights up a park with Firebending to make her happy. It’s a rare moment I wish there were more of that allows us to see that Zuko has a softer side. It’s also nice that after the amount of junk Zuko’s had to go through, he gets to have a normal evening.

As if Iroh’s tale wasn’t devastating enough, the episode finishes off with Momo. I like the device of telling a story from a non-human character’s perspective (which influenced another one of my choices). Momo is bullied by a group of pygmy pumas that he eventually befriends. But Bryke forbid we end on a happy note. For a minute, it seems like the pumas betray Momo, stealing Appa’s fur–long story–and running away. Momo, desperate to hold onto anything that reminds him of his missing friend, chases them and gets it back. The episode ends on this heartbreaking shot: 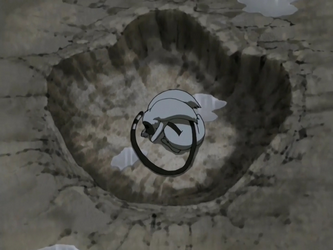 The other episodes did a good job of driving home how much the other characters, especially Aang, were affected by Appa’s absence. But this shot, without dialogue, made me mourn all over again.

Is there a happier episode I can watch?

A simple no would have sufficed.

This is another episode with very little dialogue from a non-human character’s perspective. Better yet, it’s about Appa, easily the coolest character in the series.

Oh, and did I mention Appa gets flashbacks? At one point, Appa flies to the Eastern Air temple and remembers the days when the temple swarmed with sky bison. We get to see for the first time that Aang wasn’t the only one affected by the destruction of the Air Nation. 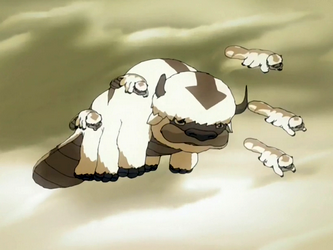 There’s a really great scene where Appa is forced to join the circus and is starved by the ringleader. Instead of eating hay, Appa uses Airbending to suck cabbages into his mouth. It’s a hilarious background event that gives us another great use of the “My cabbages!” line.

I’m glad Appa eventually reunites with the Gaang because after this episode, everyone, audience included, realized how much they needed him.

Aang and Zuko are purposefully contrasted throughout the series. In this episode, Aang struggles to learn Earthbending while Zuko pushes himself to learn how to Lightningbend.

It’s nice to see Zuko and Iroh together after a traumatic reunion the episode prior, an episode that almost made it on this list. Zuko becomes more and more frustrated and poor Iroh is unable to get through to him. At the end of the episode, Zuko has an epic rage against the heavens where he calls out the universe for all the hardship it’s thrown at him. This freakout might be a little over-the-top, but it humanizes Zuko. It breaks my heart to see a normally confident character feel powerless.

Aang’s trouble is pleasing the demanding Toph. This is only the fourth episode with Toph and the Gaang is still adjusting to her personality. Aang especially clashes with her, as his evasive Airbending style conflicts with her head-on approach.

All that is great, but the real reasons I like this episode are Sokka and the baby moose lion he befriends. Some of Sokka’s most memorable lines come from this episode, particularly when he promises to give up meat and sarcasm in exchange for freedom, which he admits is “pretty much [his] whole identity.” Just like Dante Basco is half the reason I love Zuko, half the reason I love Sokka so much is Jack DeSena. He took what could have been an annoying comic relief character and gave him depth. Everything about his delivery is perfect and he consistently makes me laugh. Bravo, Sokka! This is why you’re the leader!