I enjoy a good action scene. I really enjoy narrow escapes. I really, really enjoy masked characters with secret identities. “The Blue Spirit” has all three.

Aang has to find frozen frogs to cure his sick friends–again, long story–and is kidnapped by Admiral Zhao. Zhao unleashes some ninja archers whose archery skills, combined with Aang’s Airbending, make for some awesome action. When Aang is captured, the tension of his attempted escape is frequently interrupted by thawing frogs escaping Aang’s clothing, one of the show’s best gags.

Can we focus for a moment on how cool the Blue Spirit is?

Aang and his buddy one-up Zhao, escape the base, and go off to be awesome together.

That is, until THE BLUE SPIRIT IS SHOT IN THE FACE!

Luckily, they only knocked his mask off, and the Blue Spirit is revealed to be…

Like I needed another reason to love this character.

Aang saves Zuko and upon Zuko’s waking up, offers his friendship. Zuko, of course, rejects him, but there was a moment where I thought he might take him up on it. Plus, now he owes the Avatar–that’ll make things interesting.

This episode features another great gag where a feverish Sokka convinces himself that Appa is telling jokes. “HAHA! Classic Appa.”

Hey-o, Zuko’s featured in this episode.

I have other reasons for liking it, I swear.

For instance, I HATE Long Feng.

This guy is awful. He’s keeping the Hundred Year War a secret from the king. He brainwashes people. HE KILLED JET…probably.

This guy is clearly bad news, so to see him finally get his comeuppance is beyond satisfying.

In fact, this episode ends on an all-around good note. Toph’s parents want to see her. Aang has a girl waiting for him. Sokka reconnects with his dad. Long Feng is imprisoned. The Kyoshi Warriors arrive-

AZULA IS IN THE PALACE! 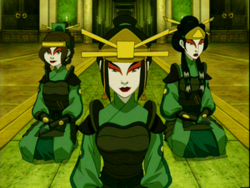 Talk about a twist! Suddenly everything is terrible; the government is in danger and no one knows about it. I was so angry when this happened, I had to stop watching the show for a few days. The strength of that twist puts this episode in the top for me.