While making my last few lists, I realized I’d had a pretty good life. The bulk of my book betrayals occurred after I turned 18; I couldn’t recall any hurtful childhood reads.

There were betrayals, all right.

And they started early.

I was 6 when the school librarians tricked me.

“Hi, Lauren,” they said as I approached the checkout counter. “You like horses, right?”

I looked down at the stack of Saddle Club and Marguerite Henry books in my arms. “Obviously” felt like an overstatement.

They slid a slim volume across the counter and smiled. “Then you’ll love this book.”

The librarians knew I only read horse literature, a genre I clung to until I turned 10. We’re not talking horse-adjacent literature – the horse had to play a large role or I lost interest. (Think The Horse and His Boy.)

Call me paranoid, but my teachers must have been in talks with the library to get me to read more “substantial” stories. They tricked me the only way they knew how: by bribing me with horses.

I never saw it coming.

Three revelations about this story:

Thus begins Charley Parkhurst’s life as a runaway and the last time a specific horse is mentioned in this book.

I was too young for symbolism. All I felt was horror.

Not only was the horse DEAD, I’d wasted my time reading about a boring REAL person who disguised herself as a MAN for some reason??

“How did you like the book?” the librarians asked on my next trip.

“HATED it,” I griped as I checked out another Saddle Club, little knowing how my interest in trans characters would skyrocket in the years to come.

I could tell my librarians weren’t sorry; they thought they’d done me a favor.

Shades of Gray by Carolyn Reeder

Many of these betrayals were born out of misunderstandings.

Careful reader that I am, I believed this book would take place during the Civil War, an impression not helped by my classmates (who thought the same thing) and my eighth-grade teacher (who deliberately fueled those misconceptions.)

Looking back, I think our teacher felt insecure about her choice of book and needed any encouragement, genuine or manufactured.

She was right to be uneasy.

The story does NOT take place during the Civil War, automatically lessening the tension. Think of how good this book COULD have been if Southern-sympathizer Will moved in with his abolitionist uncle DURING THE WAR! Then, as the conflict raged on, Will would have to reconcile his limited view of freedom with the ethics of slavery.

Unconcerned with notions of “stakes” or “plot,” author Carolyn Reeder set her story after the Civil War. The bulk of the plot focuses on Will’s struggles with chores (“WHY CAN’T SLAVES JUST DO THEM FOR ME?”), his crush on his cousin (…ew?), and his battle with local bullies.

His moral conversion takes place in a series of preachy conversations with his uncle Jed. Eventually, Jed convinces Will that Slavery is Bad, Freedom is Good, and sometimes Courage is needed for Hard Things. Inspired, Will does his chores and stands up to his tormentors.

Imagine if Will’s conversion had had an impact on his actions ASIDE from the requisite bully defeat.

I was 14 when my teacher forced us to read this. I’d been in school long enough to learn that Slavery is Bad. The book tried to convince us of this obvious fact without addressing the historical nuances.

When the class rebelled and began trash-talking this book, our teacher lost it. “THIS IS AWARD-WINNING LITERATURE!” she screamed.

She’s right: this trash won awards for telling an anti-bullying story with the moral “Slavery is Bad.”

I now know where my cynicism comes from.

The Sky Inside by Clare B. Dunkle

Y’all remember this book? No? Good, because I’m about to trash it ALL OVER AGAIN.

As always, the cover drew me in. 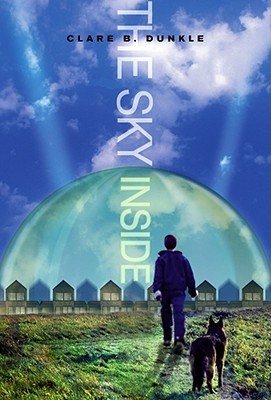 I noticed my friend Amby reading this book during math class (in the front row, no less!) She glared when I reached out to touch the shiny cover.

I had to know what it was about. “Amby!” I shoutwhispered. “What’s it about!?”

Rolling her eyes, Amby handed me the book.

I scanned the details, attention snagging on the words “fast-paced science-action thriller.” “Can I borrow this?”

For reasons I will never understand, Amby agreed. I read the first few chapters in awed silence. Protagonist Martin and his family lived under a dome with simulated weather. Instead of favoring natural birth, parents genetically engineered children. Instead of actual pets, people owned robotic dogs.

This, I thought, had never been attempted in all of fiction. (I was 14.)

After the initial set-up, a stranger appeared under the dome, promising to take the genius children to a “special school.” After discovering no such school existed, Martin and his robot dog Chip left the dome to rescue his sister.

The rest of the novel read like a survivalist manual.

“Protagonist must brave elements” is one of my least favorite tropes. During elementary school, I opted out of reading “Hatchet,” “Guts,” “My Side of the Mountain,” and any other boy-oriented adventure novel published between 1950 and 2005. I don’t want to read an entire book about a character’s struggle to stay warm during harsh mountain winters.

The bulk of The Sky Inside follows Martin as he hoofs it outside (odd, considering the title.) He might have encountered genuine stakes at some point, but I only remember him falling down hills and talking to his robot dog.

In its first act, the musical Murder for Two introduces a mute, invisible cop named Lou. The other characters interact with Lou, joking that if it wasn’t for him, they’d be talking to themselves.

Martin’s robodog Chip serves the same function without the humor brought by Lou. Any thought Martin has, he directs at Chip. “Gee, boy, why hasn’t the sun gone down?” “Golly, Chip, it sure is cold out here!”

I’d guess Clare B. Dunkle wanted to avoid writing “he thought to himself” over and over again, yet having Martin talk to a dog doesn’t feel any more natural than hearing Martin’s inner monologue. In fact, I’d rather Martin talk to himself than have inane, one-sided conversations WITH HIS ROBOTIC DOG.

Both Martin and I survived this reading experience, but it tarnished my view of sci-fi forever.

My favorite book in The Princess Diaries series is Princess Mia.

In the series’ penultimate book, Mia battles depression, copes with a breakup, reconciles with her enemies, loses a friend, and upends her country’s government.

I remember bursting with hope when I finished the book. I’d never been more invested in Mia’s struggles or felt so proud of what she’d accomplished. It was the perfect end to a long journey.

Then the final book of the series came out.

Forever Princess isn’t awful, if my umpteen rereads are any indication. It has all the jokes and drama you’d expect from a Princess Diaries novel. I made my peace with this ending a long time ago.

I wasn’t so understanding when it first came out.

Where do I even begin? To parse out my feelings on Forever Princess is to unravel my psyche.

Let’s liken it to Winter to simplify things: like other series finales, Forever Princess is too happy. No bittersweetness here; the final book is all fluff with every plot line ending happily.

In some ways, this isn’t surprising: the reason I read the series is for its light-hearted tone.

After the previous two books, however, the fluffy optimism comes as a shock.

Mia deals with more complex issues as she grows older, as seen in books 8 and 9, which deal openly with heartbreak and mental illness. The realism in these books makes Forever Princess feel all the more jarring.

Most disappointing to me was Meg Cabot’s handling of the romance.

Suffice it to say Michael Moscovitz was never my perfect Prince Charming. The longer the series went on, the less I liked him. Meg Cabot argues for the “opposites attract” theory of romance, claiming that Mia and Michael’s lack of common traits makes them a perfect pair. Personally, I prefer couples that have more in common (which is why I shipped Mia and JP.)

Michael also makes some choices regarding his relationship with Mia that I found unforgivable at ages 14, 15, and 16.

At best, Michael is a clueless dud. At worst, he’s kind of a tool.

Luckily, there’s a way to fix that!

By book 9, Meg Cabot had broken up her beloved couple and paired Mia with theater geek John Paul “J.P.” Reynolds-Abernathy, another nice, if clueless, love interest who at least treated Mia well.

To make Michael the more suitable option, Cabot transformed J.P. from a rebound into a dastardly villain. Watch as he expertly manipulates everyone around him! Witness him booking a hotel room without Mia’s knowledge! Feel his arrogance as he climbs the stairs to accept his Prom King crown! MWAHAHAHA! It’s a full-on Prince Hans situation.

To contrast with his younger persona, Michael became buff, rich, and famous, and therefore more suitable for reasons that contradicted the series’ “Be Yourself” moral.

I’m not as anti-Michael as I was in 2009. Still, I’m unconvinced Michael is Mia’s perfect prince, especially as Mia was so anxious during the bulk of their relationship. I was more interested in seeing Michael get his comeuppance for the way he treated Mia, or SOMETHING aside from the “love covers everything” approach to their reunion romance.

At the time, Mia and I were both graduating from high school and dealing with all the emotions that come with change. After following Mia’s adventures for years, I watched my favorite princess earn a “majorly happy ending.”

I didn’t want a happy ending – I wanted a fresh start.

Almost a decade later, it still hurts to see my path diverge from Mia’s. I go back and reread the series from time to time to experience that same giddy, fizzy feeling I felt when I first read these books, but it’s not the same.

Princess Mia gave me the shot of hope I needed as an 18-year-old soon-to-be graduate. Peaceful as I pretend to be, part of me wishes Forever Princess never happened.