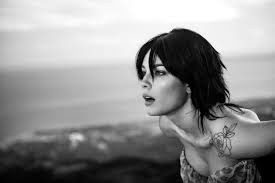 I joked about doing a Lana Del Rey recommendations tag.

…I FOUND A HALSEY BOOK TAG!

I’ve had a crush on Halsey since she dropped Badlands in 2015.

She also serves as my hair inspiration (sorry, Nicholas Petricca.)

Am I gushing? I’m really stoked about this tag.

Oh, and MERA, PERKY REDHEADED QUEEN OF THE SEA, MISTRESS OF ALL DOLPHINS AND SEA CREATURES.

HOW IS THIS CHARACTER SO PERFECT?

I like that Mera pops up in the Wonder Woman chapters to add some interest to the plot. SOMEONE had to make up for Steve Trevor hogging the spotlight!

A series you just can’t seem to quit, no matter how hard you try

I believe I’ll be reading The Ruby Oliver Chronicles for as long as I live.

Somehow this series stays relevant no matter what I do.

I nominate the best-ever church of freaks from Heretics Anonymous.

After fighting to exist, the misfit congregants are ready to battle just about anything…WITH feminist theology and radical acceptance!

A couple that needs to communicate better

I realize that Mia and Michael were teenagers when they started dating.

NO ONE has a perfect first relationship. I get that.

However, because of her anxiety, Mia never thinks she’s doing enough in her relationship with Michael.

And Michael pretty much refuses to reassure her.

I understand being annoyed by a partner needing constant reassurance…but Michael rarely tries to make her feel better.

That, paired with some of his other actions, grates on me.

All Mia needs is an occasional, “I love you and we’re not breaking up.”

Michael seemingly goes out of his way to…not do that.

This is why I’ve never shipped Mia and Michael: their relationship is turbulent.

Technically, You Started It is an adorably complete story about two awkward teens who fall in love over text.

I hope the author isn’t planning on a sequel. I thought this book ended perfectly.

Hannah and Morgan are precious together.

Write your thinkpieces. Defend Louisa May Alcott’s creative vision. Tell me this is how it HAD to happen.

This break-up WRECKED ME.

I guess the moral is never marry the guy who gets you and joins your wacky adventures.

Instead, marry the boring, poor guy who thinks your novels are trash!

I’m rereading The Raven Cycle and I just started The Dream Thieves.

I’d like to think he knows better. HE’S JUST SO STUBBORN.

In an interview, she defended his good qualities to skeptical readers.

THIS IS FETISH MATERIAL.

I guess My Lady’s Choosing had more than a few decent sex scenes.

That’s not what I read the book for, but okay.

A book or character you’re still thinking about

I STILL DON’T KNOW HOW TO FEEL ABOUT HIGH HEELS.

WILL WE EVER KNOW WHAT WOMEN ARE LIKE OUTSIDE THE PATRIARCHY?

I can’t blame or judge Sadie even one bit.

I hate villains! I hate them!

That post about bees still makes me laugh, so I choose bees!

Characters that secretly worship each other

Why did I read the I Was a Non-Blonde Cheerleader books?

Unprocessed jealousy that developed into a cheerleader obsession?

Probably all of the above.

In one of the sequels, Annisa and her boyfriend make promises of eternal love on Christmas.

You’re both in high school. CHILL.

(My high school church community encouraged teens to marry young. I’m not over it that terrible advice.)

All Out had THE GREATEST ROBIN HOOD RETELLING I HAVE EVER READ.

THERE WAS A TWIST I DIDN’T SEE COMING AND I DID NOT MIND IT.

THIS STORY WAS BEAUTIFUL AND I WOULD READ AN ENTIRE SERIES OF THESE CHARACTERS.

ELLIOT WAKE, PLEASE GET ON THIS.

I finished this post to the beautiful sounds of hopeless fountain kingdom.

More importantly: could I pull off blue hair? Comment below.

She/her. 4w3. Lover of vegan cream cheese and performative angst. Seattle-based writer currently dabbling in socialism and progressive Christianity. I love to call out, complain, overreact, analyze, and reimagine. This site contains the fruit of that labor. View All Posts